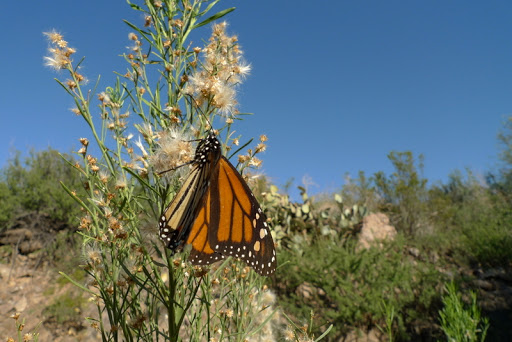 Here is the (largely pictorial) summation of my last wanderings in the desert; please forgive my extreme procrastination. 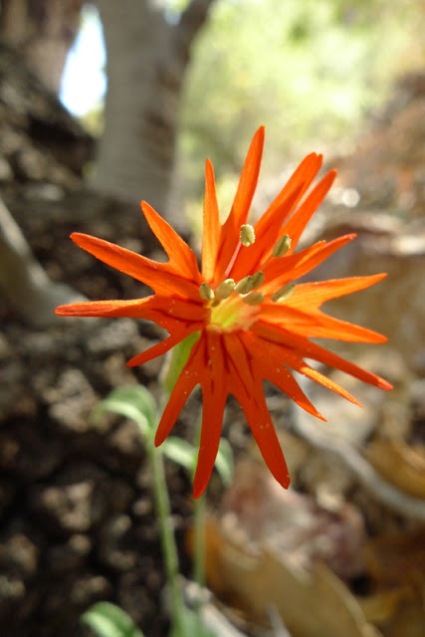 Mexican Campion, Silene laciniata.  You can see a closely related
N.C. species (Silene virginica) in my July 2011 post about the Southern Appalachians.

In mid-October Ben, Alex and I headed up out of the flat lands into the Chisos Mountains of Texas, the southernmost mountain range in the United States. Rising to over 7,500 feet, these mountains provide a a cooler, wetter, and generally more forgiving habitat in the middle of Big Bend National Park. Here you can find actual trees, including big-toothed maple, Ponderosa Pine, Douglas fir and Arizona cypress.

When we parked our truck in the Basin and began lacing up our boots, we got our first glimpse of the hike in. Though the green slopes called seductively with their promise of conifers and cooler temperatures, we knew that a 5 mile, nearly thousand meter elevation gain hike with 55 pound packs stood between us and our abode for the next three days, Boot Cabin. We trekked on. 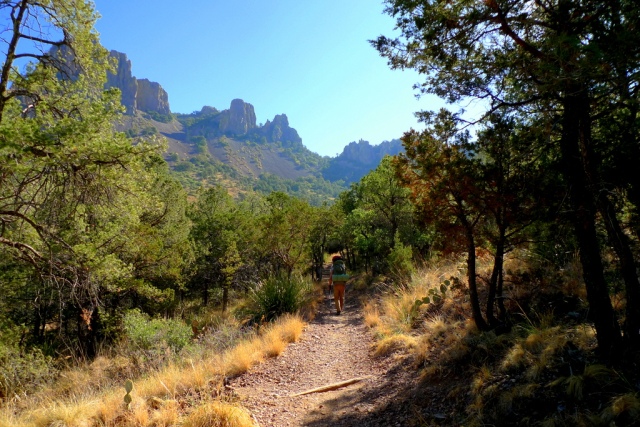 Boot Cabin was a welcome sight, indeed. Not content to rest our legs for too long, however, we hiked further up Boot Canyon to do some spring scouting and take in the vista from the South Rim, which we had been told was the best view in the whole park. 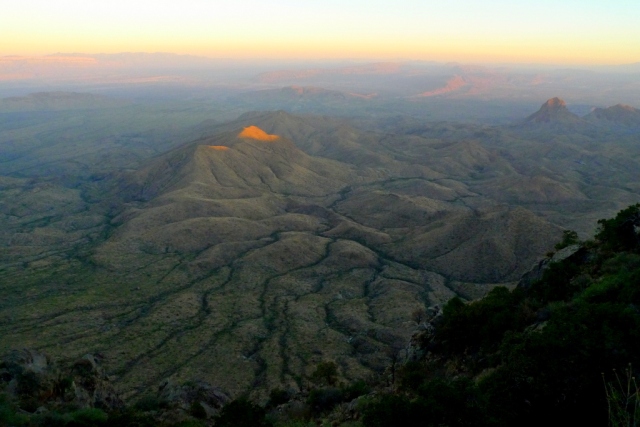 The mountain shadows creep eastward, Abbey’s “whiskey-colored light” fading slowly to pastels on the horizon, and the desert falls into dusk.

We sat down for a spell, while the swifts flew like bullets overhead, their aerial maneuvers almost too fast to see.  Green arteries flowed from the Chisos into the parched land below and from our giant’s perch it seemed the ancient formations were but small piles of sand. As we marveled at the expanse before us, a lone Monarch butterfly made its way over the edge of the Rim and floated lazily south toward Mexico and a warm winter. 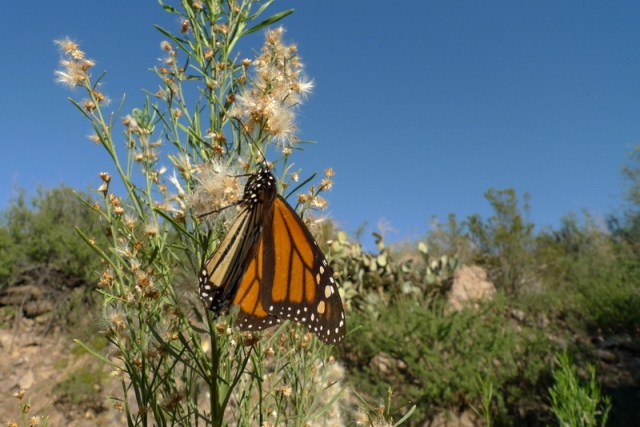 This Monarch Butterfly (Danaus plexippus) is headed south out of Big Bend, and can cover over 80 miles in a single day. The Monarch is known for its long yearly migration, over 1,000 miles from northern U.S. or Canada to Central Mexico for the winter. Most Monarchs live only 4 or 5 weeks, but as autumn approaches in the butterfly’s northern home, a special generation is born which lives 7 to 8 months! These long-lived individuals make the southerly migration, winter over, then head back north. But these old timers don’t make the full round trip — several breeding rounds along the way split up the return journey amongst multiple generations. 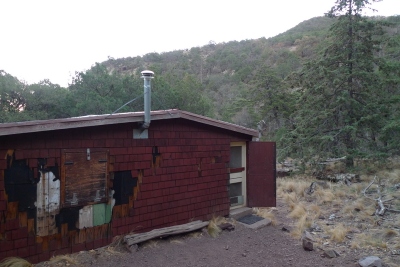 Boot Cabin is maintained as a backcountry research cabin by the park. Outfitted with solar-powered lights and refrigerator, bunk beds and a fully equipped kitchen, we decided by the end of the trip that we could all make Boot Cabin our permanent home. (The damaged exterior in the picture at left? That’s from bears trying to get inside.) 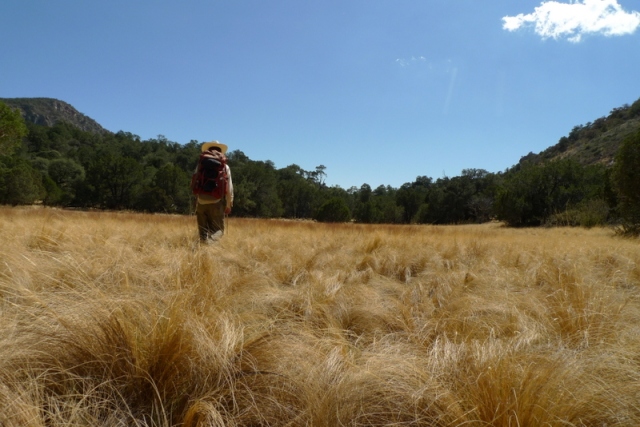 Alex strolling through a Chisos “prairie.” 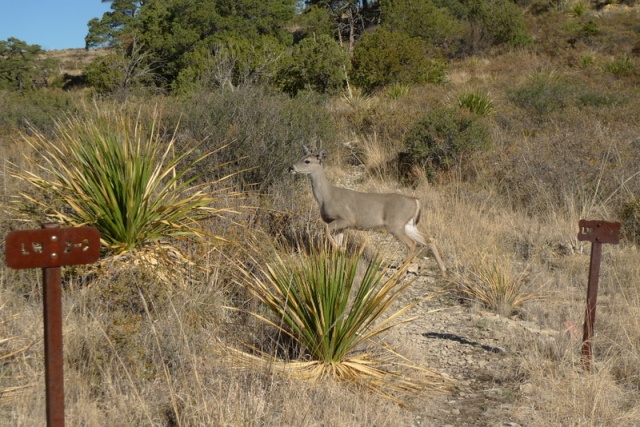 A mule deer spotted on the way to Cattail Spring. 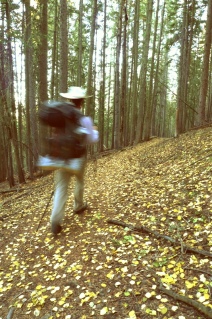 In late October Alex and I headed to the Gila Wilderness in southwest New Mexico for a few days out of the desert. Hiking below golden, stretching aspens and seeing our breath in the mornings, it was hard to believe we hadn’t even traveled over the state line. Our route, the Redstone-Baldy Loop, took us from low country along Whitewater Creek, all the way up to the highest peak in the Wilderness, Whitewater Baldy (10,895 ft.). 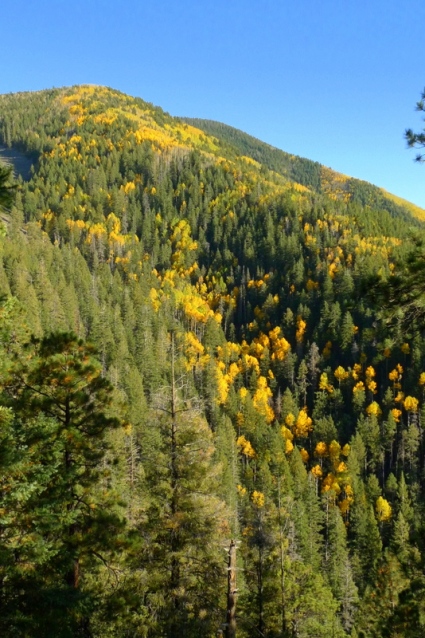 It was as if someone had tipped a bucket of gold down the mountain. 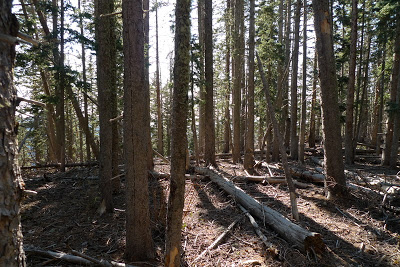 Whitewater Baldy really isn’t that bald, we discovered. Above is the view from the peak. I found that to really get the appropriate vista, you had to climb 30 feet up in a spruce tree… 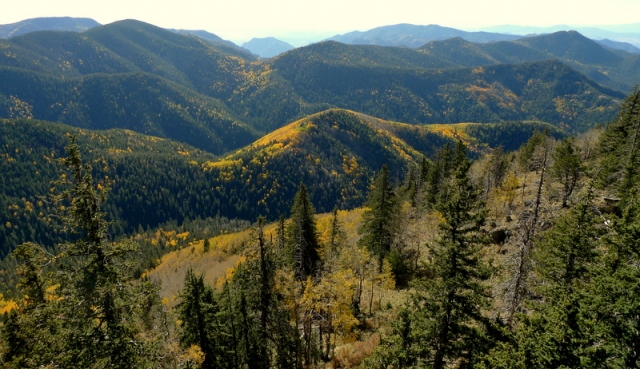 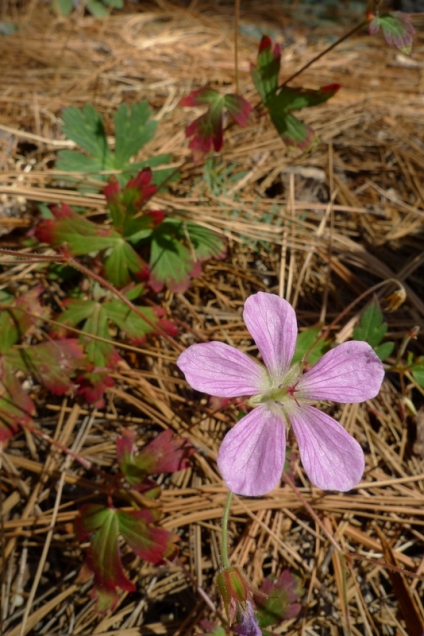 A Wild Geranium on the trail down to Whitewater Creek. 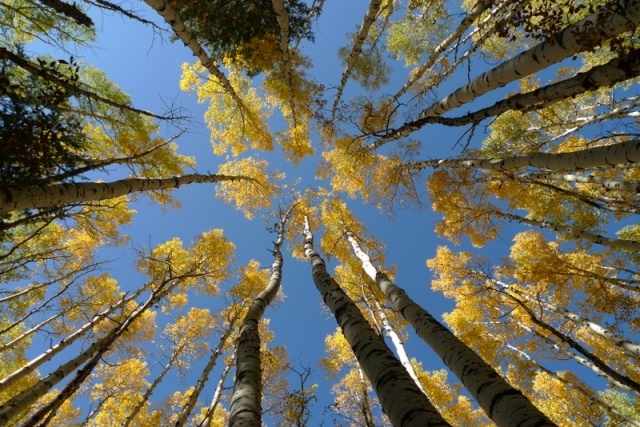 Aspen trees (Populus tremuloides) are clonal organisms, propagating primarily through root sprouts rather than sexual reproduction. This leads to massive clonal colonies that are in fact a single organism, with the oldest known aspen colony currently celebrating its 80 thousandth (or so) birthday! That’s right, the Pando Colony in Utah is both the oldest and heaviest known organism on Earth: over 6,000 tons and more than 80,000 years old.

Our second to last tour took us to Elephant Tusk, a remote section of Big Bend hosting a (supposed) menagerie of springs. Briskly flowing brooks were indeed a welcome prospect, but what was even more exciting for me was that we were mule packing! This time honored tradition is still alive and well in Big Bend, which employs its own full-time “mule skinner” (Joseph, seen above). The whole process — from loading the mules on the trailer, to wrapping all our gear in large canvas tarps to hoist onto the mules’ backs, to watching these hardworking beasts trot speedily ahead of us on the hike in — was nothing short of fascinating. Able to carry 300 pounds apiece, the line of mules above carried 4 days worth of gear for 6 people a distance of 10 kilometers in about 2 hours. 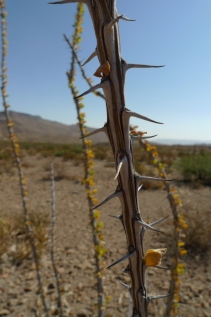 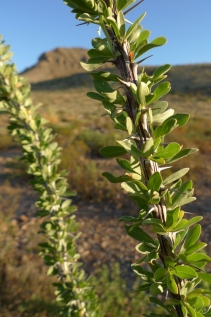 Ocotillo (Fouquieria splendens) is another well-adapted desert plant very common in the Chihuahuan Desert. Most of its life is spent as a rather dead looking, spiny, leafless stalk (left) that can reach heights of 30 feet (more commonly 10-15 ft). But look closely and you’ll see green stripes along the stalk — these are active photosynthetic areas, allowing the plant to continue to produce sugars while leafless. Leaves (center) are produced quickly in response to rain, and are kept until drought conditions return, when these water-costly structures are dropped and the plant returns to its spiny, barren state. Brilliant orange-red tubular flowers (right) are produced at the tips of the stems sporadically throughout the year, with pollination services provided by hummingbirds and honeybees. 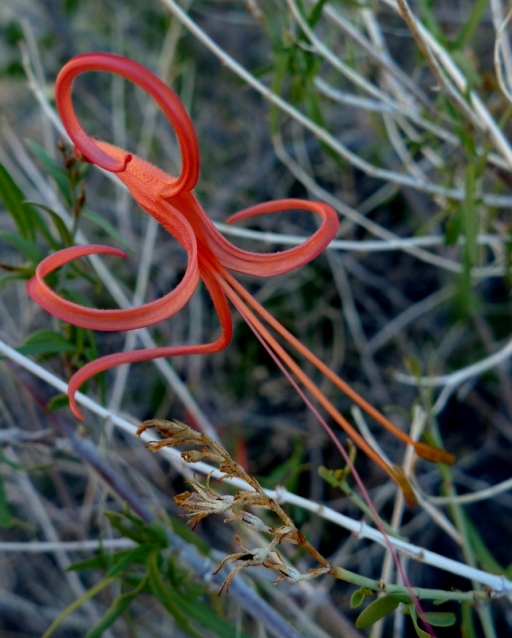 Big Bend Acanthus (Anisacanthus linearis), with its gracefully recurved petals,
is endemic to the Chihuahuan Desert. 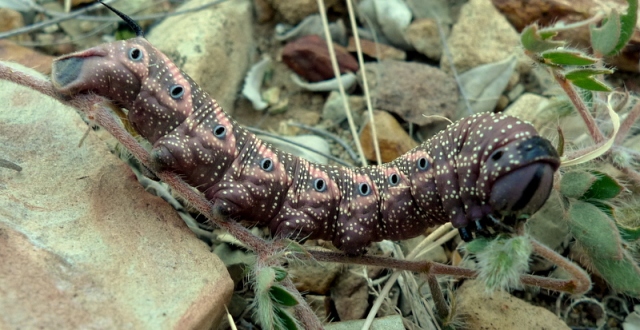 I have no idea what caterpillar this is, but it sure is striking. 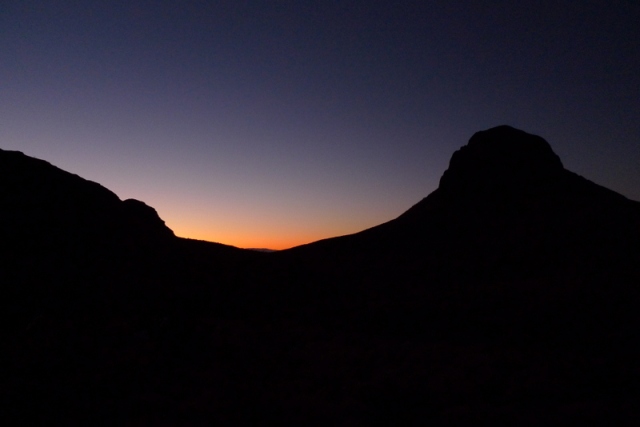 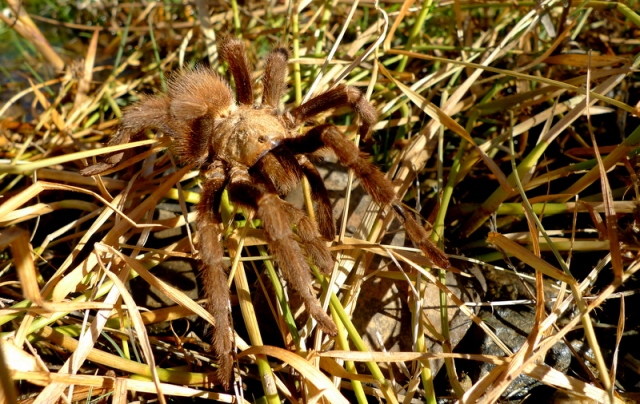 Finally, a Tarantula! I’d been waiting all fall to spot one of these beauties;
this one was relaxing on the rushes at my very last spring. 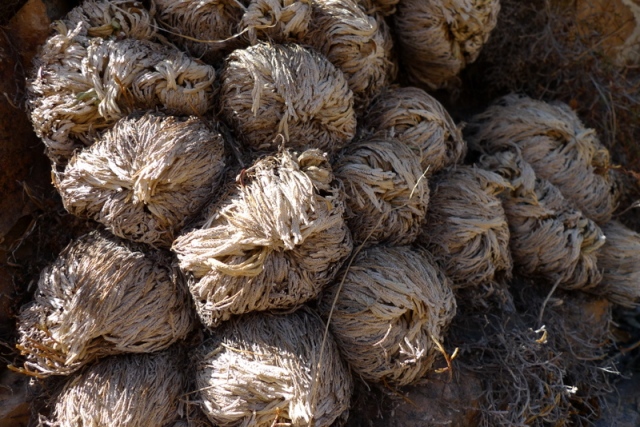 Resurrection Plant (Selaginella lepidophylla), is a Chihuahuan Desert native with an amazing tolerance for dry conditions. When water is scarce, this spikemoss curls up (as above) and enters a state of dormancy, tolerating moisture contents as low as 6% (most plants cannot handle below 75%). When it rains, Selaginella’s cells rehydrate and its stems unfold in a flush of green (below). 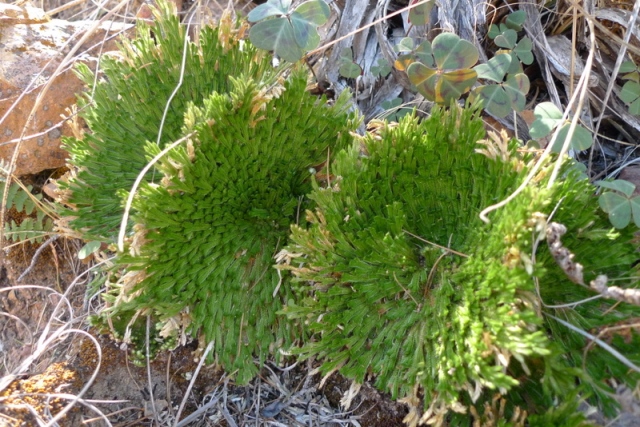 I hope you have enjoyed exploring the arid Southwest with me. The organisms inhabiting this harsh landscape exhibit some of the most remarkable adaptations seen in nature, and their environmental tolerances are a model for our own personal ones. If you’d like to read more about desert ecology, I highly recommend Desert Ecology by John B. Sowell.

I’m now working in the Plant Ecology Lab at Archbold Biological Station in Florida, so my next post will be from the Lake Wales Ridge.

One thought on “Last Days in the Desert”

I’m a North Carolina transplant working as a post-doc in the Moeller Lab at the University of Minnesota — Twin Cities. 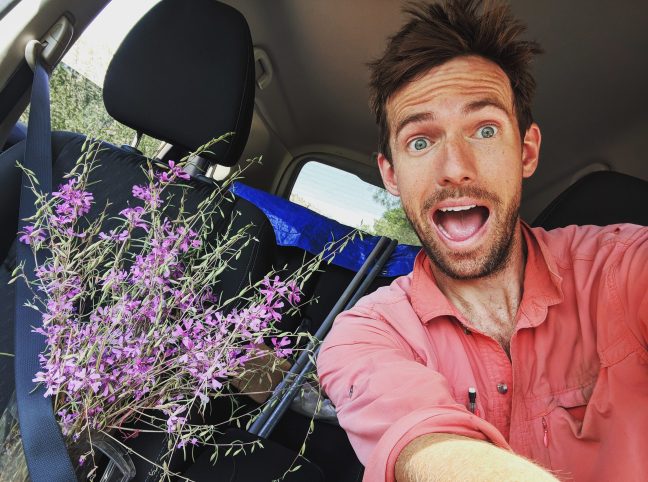